Newest, beautiful, single women now added for week of Wednesday, August 5, 2020 - Tuesday, August 11, 2020
During this COVID-19 crisis, be assured we are still working daily to ensure your success!

What Makes Cartagena Colombia Such an Attractive City 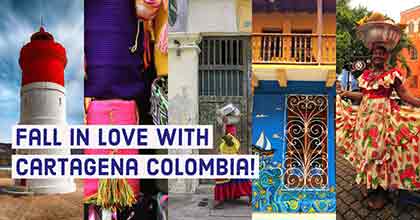 Discover the unique sights and sounds of Cartagena, Colombia.

Did you know that Cartagena, Colombia is said to be one of the inspirations of Macondo from the best-selling novel One Hundred Years of Solitude? It would make sense considering both cities seem isolated from the rest of the world. Because of this, it almost seems like the city remains untouched by time. Perhaps this is why the city is considered the “Jewel of the Indies.”

Just what makes Cartagena stand out among other cities? It’s difficult to put into words what makes this city so magical. But to give you a vague idea, here are some qualities that make Cartagena memorable:

Just by looking at the old houses in the city, you can tell that it used to be a colony of Spain. There are two areas in particular that seem frozen in time, namely Old Town and Bocagrande. While there are some buildings that are properly preserved, there are others, however, that aren’t in such good shape. You can visit any of these buildings and marvel at 16th-century architecture.

While there are some houses that retained their original exterior, some owners added their own Colombian flair by painting them in bright and glaring colors. There are even some that are painted with graffiti portraits and other street artwork. And with locals wearing colorful outfits and selling equally colorful wares, you could say the city is awash with bright colors.

The culture of Colombia is heavy on art. This is evident on all the street artwork in their murals and even the walls of their homes. But you can also find contemporary statues in their parks, such as those in Plaza Santa Domingo, Costado Castillo San Felipe de Barajas, and Estacion de Bomberos. The city even has a memorial bust of Gabriel Garcia Marquez (author of One Hundred Years of Solitude) found in Centro Historico. The best thing is that most of these statues are found in public spaces, so you don’t need to pay to see them up close.

Ceviche, Mojarra Roja, and Camarones al Ajillo; these are just some of the savory seafood dishes you can try in Cartagena. Aside from seafood, there are also some hearty dishes you can try, such as Posta Negra, Sancocho, and Mote de Queso.

Singing and dancing are just some of the things to do in Cartagena, Colombia. Some would even say that your trip would not be complete if you don’t experience the music and dancing. The city is known throughout the country for its legendary Salsa dance clubs, so you should definitely stop by one of them. But if you want to listen to authentic Colombian music, then head to Palenquera village (the home of champeta and bambuco).

When you go around the city, you might encounter brightly dressed Afro-Latinas selling fresh fruits. These ladies actually come from San Basilio de Palenque, which is the first ever freed slave settlement in the Americas. What’s fascinating about them is that despite globalization, they were able to retain their unique culture.

But these palenqueras aren’t the only colorful people you’ll encounter. In Getsemani, you’ll find various performers and street artists in the local bars, hostels, and other establishments.

Not many people know that the city has some picturesque beaches. The most accessible Cartagena, Colombia beaches are found in Bocagrande and La Boquilla, but the more popular ones are Playa Blanca, Isla Grande, and Tierra Bomba. The latter, in particular, is home to various plants and wildlife.

Still not convinced that you should visit and experience Cartagena? What if we told you that here you can find some of the most beautiful Colombian women? Your trip might lead you to marrying a Colombian woman.

Newest, beautiful, single women now added for week of Wednesday, August 5, 2020 - Tuesday, August 11, 2020
You have to meet the women to marry them! We have group singles tours departing nearly every month!